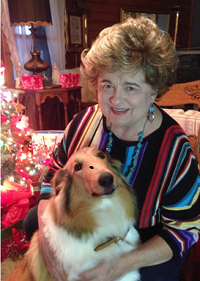 Dr. Chiodo grew up in Leakey, Texas, about as “West” as Texas gets.  Leakey in those days had less than one traffic signal, and many other wonderful attributes as well.  In Beverly’s eyes, the most wonderful attribute of all was her parents, who early on had chosen to build their home and lives in Leakey.

Beverly spent her youth in a community that loved 4H.  She showed sheep, goats and cattle with the club and took home a Champion Fine Wool Fat Lamb ribbon from the State Fair in Dallas, as well as a Championship ribbon for a Charolais heifer from the Houston Stock Show.  These were important wins as they provided the funds for her education at Baylor University.

She caught the speaking bug early in life – eighth grade, to be precise, when she earned not only the title of class valedictorian, but the duties as well, one of which was to deliver the class valedictory address.  She claims today that she was an introvert back then, and figured no one believed she would actually stand before the faculty and students to speak.  But any who doubted were proven wrong, as she not only delivered her speech, she also discovered a special place in her heart for speaking.

As Beverly advanced into high school and worked through her business studies, she began to recognize her future.  By the time she moved on to university she was hooked on a vision of becoming a business teacher.

She prepared well to pursue her vision, receiving a Bachelor of Business Administration degree from Baylor University, a Master’s degree from Texas Tech, and her doctorate from Texas A&M.  She put her training to great use, too, teaching for a total of 51 years, 47 of which were spent as a member of the faculty of Texas State University, San Marcos, Texas teaching in the Department of Management.

Today Beverly remains especially thankful for the opportunities she was given at Texas State, opportunities not only to work with wonderful people at a great institution, but also to pursue some visionary goals, applying innovative processes in her classrooms.

Her teaching is heralded today by many former students whose personal and professional lives were greatly enriched by her vision and passion for living and leading with character.  She considers these former students – who have become respected managers, entrepreneurs, parents, professionals, politicians and more, throughout the leadership ranks of three generations of Texans – to be her greatest blessing and motivation, both professionally and personally.  Her testimony to this author is simple ... “I loved teaching!”

Beverly retired from Texas State in 2015, and now continues to pursue her vision for inspired character training in the marketplaces and halls of power of America.

For many years, she has spoken at upwards of fifty events per year, and still finds time to raise Akaushi cattle, goats, chickens, quite a lot of cacti, and some nasty feral rattlesnakes.  To say she is at home on her ranch (affectionately known as the Diamond C) would truly be an understatement.

BEST of all, for many years, Dr. Chiodo has been known by many of her students as “The Doctor of Encouragement”!